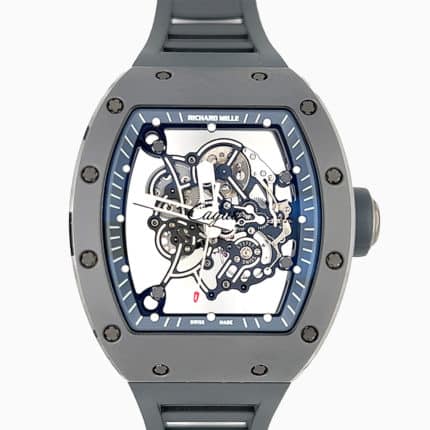 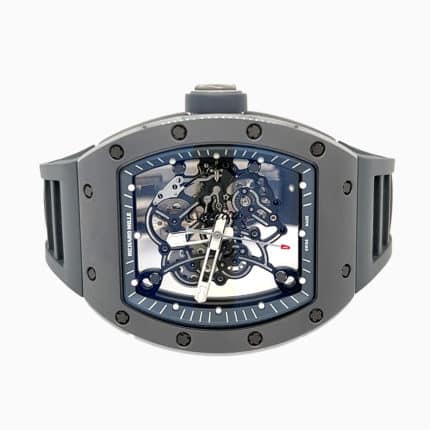 Richard Mille
When the RM 055 was initially released in 2011, it was produced in white ceramic TZP. The watch was later released in black and this all-grey Boutique Edition (Limited to 100 Pieces worldwide). Made in collaboration with Bubba Watson to be the ultimate sportsman's timepiece, being able to withstand the huge shocks involved when playing golf. This pre-owned Richard Mille watch is incredibly rare to find in pristine condition, complete with original factory box and papers.
Add to wishlist
Enquire
Quick view
FOLLOW US

Pay for your purchase securely with various options such as Credit Card, PayPal, Bank Transfer and Cryptocurrency.

Comprehensive 2-Year warranty and after-sales service on all watches. Enjoy a lifetime warranty on all Cagau jewellery.

We guarantee that every watch we sell is 100% authentic and fully inspected by our in-house experts.

We offer complimentary shipping on all orders. All items that leave our showroom for shipping are fully insured.

Join to receive insider updates on our latest collections, invites to our private events, and other exclusive offerings.

Will be used in accordance with our Privacy Policy
Filters
We use cookies to improve your experience on our website. By browsing this website, you agree to our use of cookies.
Accept
Start typing to see products you are looking for.
Select your currency
USD United States (US) dollar
AED United Arab Emirates dirham
EUR Euro
GBP Pound sterling